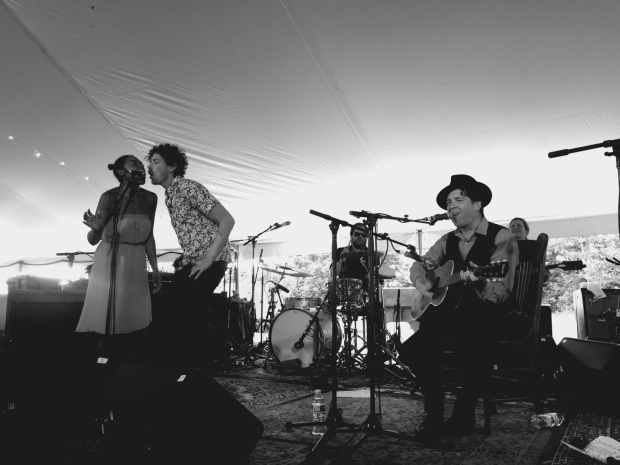 I half-joked this morning to my good friend Josh Hurst that Nowhere Else Fest might better be described as a backyard barbecue that got a little out of hand, rather than a music festival in any familiar sense of the term.  Perhaps more generally, one might just call it a celebration of community.

To longtime Over The Rhine fans, particularly those based in and around the band’s home base of southwest Ohio, this community is quite tangible.  As Nowhere Farm and adjacent Nowhere Else continue to take shape, OtR have given this community – along with their loyal brothers and sisters, dispersed throughout the world – a place to gather, eat, drink, listen, converse, sing, dance and celebrate.  This year marked the first time that Karin Bergquist and Linford Detweiler expanded the scope of this gathering to include many of their friends, who happen also to be some of the most extraordinary artists in the world.

Among this community, I am a bit late to the game, having been a fan for only about half of their quarter century career.  But I was very much a supporter long before their paths crossed that of Joe Henry.  It was a thrill for me when they sought him out to produce The Long Surrender (and re-enlisted him for the follow-up Meet Me At The Edge Of The World), but it has been incredibly gratifying to witness the bond that they have forged in the past few years.  There were many connected dots at Nowhere Else Fest, and many of those connections could be traced back to Joe Henry as much as Over The Rhine.

I am not being coy when I tell you that a thorough daily breakdown would be far too daunting (and potentially boring) to undertake here.  The festival essentially began Friday night with a VIP event that included food, drink and an insanely intimate performance by OtR.  They were, as they were all weekend, joined by The Band Of Sweethearts, which includes Jay Bellerose on drums, Brad Meinerding on guitars, Eric Heywood on pedal steel and Jennifer Condos on bass.  Many of these astounding musicians pulled double-duty by joining The Comet Bluegrass All-Stars (in Brad’s case) and Joe Henry (in Eric, Jen and Jay’s case).  The festival-proper kicked off, bright and early, around 10am on Saturday with a number of events, which included a seminar with master photographer Michael Wilson and nature painter Rebecca Weller, not to mention an emotional reading by Barry Moser from his memoir We Were Brothers.  We were then treated to a lovely kickoff set by OtR, which set the stage for all kinds of incredible musical moments, which would simply threaten to eclipse one another throughout the weekend.  Here are only a few… 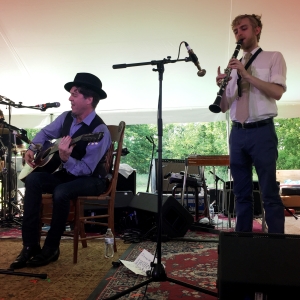 Joe Henry:  Acoustic set on Saturday, joined by Levon Henry for most of it.  What more could a JH fan ask for?  How about a Sunday morning songwriting seminar that stretched nearly two hours?  I’m sure I have mentioned many times how generous Joe Henry is with him time, but it was a rare treat indeed to hear his philosophy on songwriting (and life?) in such an incredible setting, nestled as we were in the loft of OtR’s barn, future home to intimate performances, recordings and who-knows-what-else.

Then came his Sunday set, effectively opening for The Blind Boys of Alabama.  Josh and I agreed that perhaps it was the best show we’ve ever seen by Joe – loose, wild, intense and exuberant.  He was joined by Jen, Jay, Levon, and, for a few numbers, by Eric Heywood on pedal steel (“Plainspeak” was revealed to be a loping honky-tonk number).  Then to cap it off, he invited JT and Allison from Birds of Chicago to join him for a smoking rendition of John Prine’s “Storm Windows.”  Who else, but Joe Henry, could reimagine “Storm Windows” as a semi-gospel rave-up, not the least bit unlike the many versions of The Band’s “The Weight” that you’ve heard so many times?  It was, very possibly, the musical highlight of a weekend completely jam-packed with them.

But, of course, there was…

Birds of Chicago:  You will not speak to a soul at Nowhere Else Fest who will fail to rant, rave and tug at your coattail with tales of wonder and revelation, served from the altar of Birds of Chicago.  I will wager that they came into this festival as the relative unknown and left as the band on the tip of everyone’s tongue.  Their Saturday set was a reminder that live performance can aspire to something approaching a tent revival, assuming you believe that music is but one of many ways that the Divine reveals Himself to our eyes and ears.  But even if you don’t… Birds of Chicago were simply a force of nature.  Look at it this way:  they have released arguably the best record of the year (Real Midnight, produced by Joe Henry), and easily my favorite song of 2016 (“Remember Wild Horses”), and, yet, I was wholly unprepared for how powerful the band would be in a live setting.  Birds of Chicago are getting ready to hit the summer folk festival circuit, and they will spend most of the summer re-printing t-shirts and CD’s.

But, of course, there was…

Over The Rhine:  What.  A.  Vision.  The journey to this festival has been an act of sheer will on the part of Karin and Linford.  One can hardly imagine what they were thinking years ago when this journey began, but the rest of us are the beneficiaries of their foresight, which appreciated their community perhaps more than anyone else.  They played set after set, stunning their seasoned audience each time.  But, of course, OtR fans have come to expect nothing less.  Did I mention that Levon Henry repeatedly joined the band on saxophone and seemed to take his playing to new heights each time?

Over The Rhine have ventured into uncharted territory with this music and arts festival, and I don’t envy them their task for next year: somehow conceive an event that matches the power of this year’s Nowhere Else Fest without wholly repeating it.

Or just repeat it – please, just do. 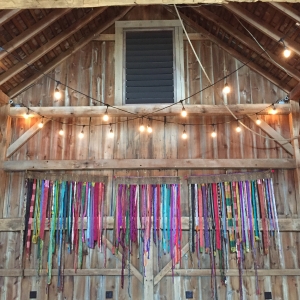 (And, yet, I have failed to mention: workshops with Michael Wilson and Barry Moser, a lovely set by Lily & Madeleine, the always-charming Lucy Wainwright Roche, Levon Henry’s revelatory solo set, the stunning art of Melanie Ciccone.  The candid and touching discussion of music and healing, featuring Jeffrey A. Ward.  And the many lovely family and fans that I met this weekend.)

It was all there at Nowhere Else Fest — see you next year!

It’ll hit 90 degrees in Houston this week, so I figured time was running out to post any Late Spring JH news…

Big thanks to Stefan Vandenberghe for keeping us updated when I am sometimes slacking off! 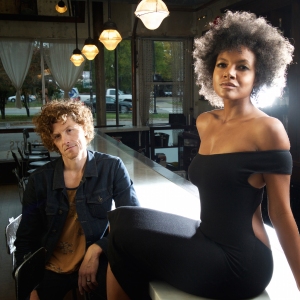 I have to confess that I somewhat glossed over the release of Birds of Chicago’s Real Midnight back in February.  Having received the Kickstarter digital copy back in November, it just kind of fell below my radar when it was officially released.  In fact, I really only started spending quality time with the album over the past two weeks, and it is something quite special.

As luck would have it, our old friend, Josh Hurst, has revamped his own website and has just reviewed Real Midnight.  As he often does, he finds the perfect words to describe the spirit of this album.  As you may recall, Real Midnight was the final album recorded at Joe Henry’s Garfield House studio.  Jay Bellerose plays drums on the record, and Rhiannon Giddens provides vocals and fiddle on a couple of tracks.

Also, be sure to check out Josh’s recent reviews of Lucinda Williams’ The Ghosts of Highway 20 and Tedeschi Trucks Band’s Let Me Get By, two of my other favorite releases of 2016.

UPDATE:  Over The Rhine recently announced that Birds of Chicago will be joining the lineup of their Nowhere Else Festival over Memorial Day weekend (see below post for more details).