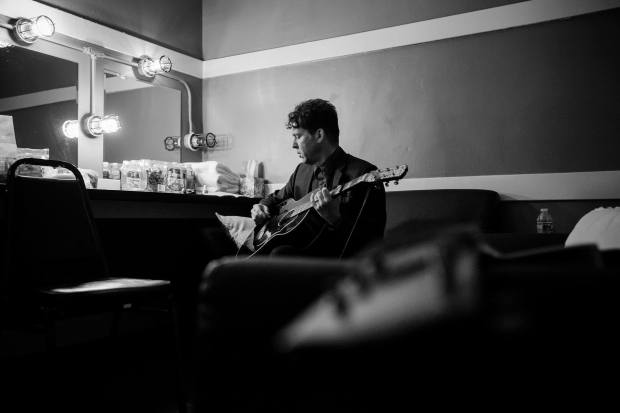 Joe Henry has a brilliant new album, Thrum, which was released at the end of October.  Though it mines similar musical territory as the albums he’s released in the past decade, it offers its own twists and turns.  To my ears, it combines the dark density of Blood From Stars with the intimacy of Invisible Hour.  Notably, it marks JH’s return to a recording studio, following his string of Garfield House records that began with Civilians.  What that all adds up to I’ll save for (hopefully) another blog post.

To mark the album’s fresh release, JH will embark on a whirlwind tour of the U.S., kicking off with an artistic residency in Durham, NC (Nov 30 – Dec 2, detailed in this Indy Week article).  Appropriately, Thrum will receive a full public airing at the Baldwin Auditorium on JH’s 57th birthday.

A European solo tour will kick off on Feb. 1 in London.

Now, in case you might be wondering, is the Joe Henry Blog back or just poking its head out?  That’s a good question that would require a lot of backstory on my part.  What I can say is that my reasons for somewhat abandoning the blog are still valid, but I find myself occasionally wishing I had place to simply pour some of my JH-related thoughts.  Which is to say I feel no need to be a one-stop-shop for all JH news but maybe there are things I still need to say that adhere a bit closer to the original mission of this blog.  Maybe what I’ve always been wondering is how does my life and the world around me make more sense when there is a Joe Henry song pulsating somewhere in my mind.

Maybe it just felt strange to let the release of a Joe Henry album and the beginning of a tour pass by unremarked.  That’s enough reason for now.

I’ll leave you with this haunting performance by JH and Levon of “The Glorious Dead,” one of two songs on Thrum that incidentally made their debut more than three years ago at the Wild Edges show in Durham…

Following last year’s inaugural Nowhere Else Festival at their home, Karin Bergquist and Linford Detweiler of Over The Rhine have expanded the format of this year’s festival to include several guest artists.  I wasn’t able to find the contents of their latest email update online, so I’ve just reproduced it here.  Joe Henry will appear at the festival this year, alongside several other noteworthy artists, including Levon Henry.  A festival FAQ link and ticket link can be found at the bottom of the update…

(Apologies for the relative lateness of this post, but as you know – since you are reading this post at the new site – I’ve been a little busy with the move of the blog.  Thanks for your patience and thanks for checking out the new blog location. – DK) 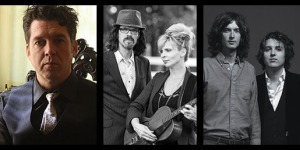 Josh Hurst – a friend and occasional contributor to this blog – joked this past weekend about how he personally “willed into existence” last year’s collaboration between Elvis Costello and The Roots, two acts for whom he is very passionate.  One could make a similar observation that Wild Edges – a commissioned performance of original songs from Joe Henry, Over The Rhine and The Milk Carton Kids – might have likewise been the result of subconscious prayer and wishful thinking from Josh, myself or any number of fans of these intertwined talents.

Setting aside the complete uniqueness of the event (over two nights at Durham’s Hayti Heritage Center), one could conceivably worry that the endeavor would look better on paper than it would sound in execution.  It is, after all, a tall order for artists to compose and perform original music, never heard in public in any format, and connect it to the ears of an expectant audience.  If anticipation was already high, the stunning and intimate setting of the Hayti certainly raised the stakes.

All that said, however, it will surprise few readers of this blog that I and – judging from their exuberant reaction – nearly everyone in attendance walked away from the two nights with all expectations met and exceeded, not to mention souls and spirits nourished and renewed.  The premise was to connect selections from the Great American Songbook – which in this context was represented by inspirations such as “Delia’s Gone”, “The Needle and The Damage Done”, “Spring Can Hang You Up The Most” and many others – to the new songs.  Those connections were occasionally explicit but mostly provided springboards for the compositions, which, according to Henry, would have to “fight it out in the streets,” just like any other songs.

And fight they did; though in these capable hands, they mostly floated like butterflies while occasionally stinging like bees.  Almost every song had something unique to offer.  Henry’s “The Glorious Dead” certainly sounded like something lifted directly from his own songbook, but, as Linford Detweiler pointed out, sounded like “an unearthed hymn.”  “Dangerous Love” was a swinging tune on its own merits, but Levon Henry’s wicked saxophone solo that capped off the performance wrenched it off its foundations.  Both evenings opened with “Los Lunas,” which was as perfect a song as I’ve heard Karin Bergquist sing, underpinned by Kenneth Pattengale’s lilting pedal steel.  Joey Ryan had several standout performances, and his voice proved to be a key ingredient on many of the evening’s songs.  Ryan reliably provided dry comic relief in between more than a few of the songs.

The cast was superbly accompanied by Henry regulars Jennifer Condos (bass) and Jay Bellerose (drums, percussion and assorted noise), along with Levon on clarinet and saxophone.  The performances were packed with musical highlights but certainly his contributions were among the most indelible.  Likewise, Pattengale no doubt shocked the audience with his vast reserves of instrumental talent, which included impressive work on pedal steel, dobro, electric guitar, accordion and piano.  The number of participants ranged from two (when Pattengale accompanied Bergquist with his soulful piano on a tune only played during the second evening) to all participants, with all points in between as various cast members left the stage briefly.  Unsurprisingly, with this batch of talent, the arrangements never threatened to overshadow or suffocate the songs themselves.

The proceedings were recorded by engineer Ryan Freeland for possible future release, and after two nearly flawless presentations, one should anticipate that little will prevent that from happening.

Followers of these acts are most likely the type of music fans who hold dear the notion that music is more than mere entertainment and can occasionally achieve transcendence.  My guess is that all who bore witness to these miraculous two nights of music walked away with that assumption both intact and fortified.

Here are a couple of reviews from the local North Carolina press:

Duke University's Independent Daily has a little more backstory on this week's Wild Edges performance at the Hayti Center in Durham, as well as some information on what may happen with the live recordings.

Also, check out Karin and Linford's photo feed for some behind-the-scenes pictures of this week's rehearsals.