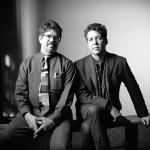 The Project Room in Seattle recently posted a terrific interview with co-authors Joe Henry and David Henry.  They discuss Furious Cool, of course, but also touch on a number of interesting topics.  Great discussion – check it out (direct link, iTunes link).

Also, if you haven’t taken a look at my Furious Cool press page, please do so.  There are some other great articles and interviews with Joe and Dave.

Well, we've had several nights in the 50's here in Houston, which must mean the rest of you in the Northern Hemisphere are enjoying between seasonal and frigid conditions.  As such, I apologize for the lack of posts recently and hope this will catch you up on a few recent JH happenings.

That's about all I know for now.  I know of at least one artist who has recently graced the basement of Garfiled House, and I would expect to hear about that project in the coming months.  And, of course, all indications are that we'll be hearing about a new JH album any day now.  Fingers crossed!