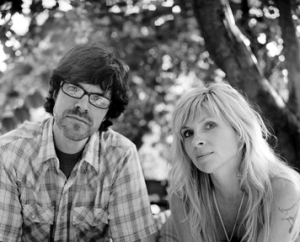 Back in May, Over The Rhine holed up in Joe Henry's Garfield House studio to record their latest record.  The Long Surrender will be released on January 11, 2011.  In October, the band hosted an online preview for fans who pre-ordered the album during the fundraising drive.  It's safe to say that the result will please fans of both OtR and JH's production work.

(JH fans, take note:  Joe will be joining OtR for their homecoming concert in Cincinnati on December 18.)

The full press release below…

LOS ANGELES, Calif. — The Long Surrender, the new studio album from the southern Ohio-based husband-and-wife team of multi-instrumentalist/vocalist Linford Detweiler and vocalist/multi-instrumentalist Karin Bergquist, otherwise known as Over the Rhine, is something rare and wondrous — an intimate epic. The fan-funded record, to be released January 11, 2011 on OtR’s own Great Speckled Dog label (named for the couple’s Great Dane, Elroy), marks 20 years since their 1991 debut. It’s the bountiful result of a collaboration between the couple and Joe Henry, whose songs they’ve long admired.

“Joe has been quietly making records (well not that quietly, he has won at least two Grammys) that don’t sound like other records bring made in 2010,” says Detweiler. “They are a little bit dark and cinematic and funky and unpredictable. It seems like he loves to help performers who have already covered a lot of miles — Mavis Staples, Elvis Costello, Solomon Burke, Loudon Wainwright III, Ramblin’ Jack Elliot, Mose Allison, Allen Toussaint — rediscover the soul of what they do in a new light.” The Long Surrender was recorded at Henry’s Garfield House studio in South Pasadena, Calif.

“With The Long Surrender, our vision was to make a record we couldn’t imagine in advance,” says Detweiler. “We wanted to be surprised. We wanted to remain open, let the record unfold in real time. Fortunately, Joe loves to be surprised as well.”

The album’s title “speaks to our ongoing desire to let go of certain expectations — and much of what we are convinced we know for sure — in favor of remaining open and curious,” Bergquist explains. “It seems like so many of our friends are currently wrestling with various forms of ‘letting go,’ so hopefully the ideas conjured by the title feel somewhat universal. And I think the title speaks to the arc of a lifetime commitment to writing and performing regardless of recognition. Learning when to work and when to let go. Learning to leave room for grace to billow our sails occasionally. Learning not to white-knuckle everything.”

In his liner notes, as much free verse as prose, Henry writes, “Before their arrival on my turf, my communication with them had been a fast flurry of emails, occasional phone conferences and songs that I’d find sporadically in my morning inbox. I had pictured Karin and Linford in the attic of their Civil War-era house in the rural outskirts of Cincinnati, huddled beneath a swinging bare bulb, shooing away pigeons and confiding songs-in-progress into an old German-made reel-to-reel recorder . . . I am not suggesting that these songs as I first heard them sounded in any way anachronistic, but rather that they shimmered in some amber band of light that stood outside of time . . . hung like blue smoke in rafters. And Karin and Linford brought with them, in fact, the greatest gift one can bring to a collaborative outing — that being an abiding faith in and a continuing wonder at the mystery involved in the process.”

The May 2010 sessions at The Garfield House enlisted drummer Jay Bellerose, bassist David Piltch, pedal steel and all-things-stringed player Greg Leisz, keyboard sound-scapists Keefus Cianca and Patrick Warren and Joe’s son Levon on tenor sax, along with soul singers James Gilstrap, Niki Haris and Jean McClain. Lucinda Williams, of whom Detweiler and Bergquist are longtime fans, traded lines with Bergquist on the song “Undamned,” which evokes a campfire gathering under a canopy of stars in a John Ford Western.

Even more than their earlier records, The Long Surrender seamlessly interweaves the disparate strains that form the many-colored crazy quilt of American music. “We’re really only reflecting what we’ve already heard,” Detweiler explains, “a mix of all the music we grew up with and were drawn to . . . But when this music is reflected back to the listener through the filter of our own particular lives, it hopefully becomes a different experience for those with ears to hear.”

As Henry puts it, “We settled for luminance over order, a terse beauty and a smeared-lipstick brand of soul. . . I am not in the business of dispelling mysteries, only abiding them when invited. Mystery is life’s strange and glorious weather, so to speak. And this time, Over the Rhine brought it with them.”

Over the Rhine will preview The Long Surrender over a series of fall tour dates, the centerpiece of which is “Over the Rhine Across the West” <http://www.flyingunderradar.com/rails/FT10LS.htm>, a five-day music festival held November 5-10 aboard railroad cars from Los Angeles to Santa Fe, across the Mohave Desert, tracing the lines of Route 66, “the Mother Road,” and then by chartered motor-coach to the Painted Desert, the Petrified Forest, Winslow, AZ and the Grand Canyon, before re-boarding for the return trip. Also featured are Lucy Wainwright Roche, Mickey Grimm and Swan Dive, as well as photographer Michael Wilson and naturalist Lynn Neal.

Other fall and winter shows: